The construction and delivery of Lancaster bomber ED559

ED559 - Avro Type 683 - was among a batch that had a serial number range between ED303 to EE202. Of the 620 aircraft constructed between November 1942 and June 1943 (129 were Lancaster Mk.Is and 491 were Lancaster Mk.IIIs of which ED559 was one).  Up to ED782 production was mixed between the marks but from ED783 all were Mk.IIIs. The Lancaster B Mk.III was almost identical to the earlier Mk.I but had Merlin 28 engines manufactured under licence by the Packard company in the US.
According to records held at the Avro Heritage Museum in Manchester, ED559 was delivered to RAF Grimsby on the 3 February, 1943, probably by a single pilot of the Air Transport Auxiliary (ATA), always flying with the ground in sight and using a map for navigation.  The records also show that the entire squadron roster for 100 Squadron of 16 aircraft plus two reserve were delivered between 29 January and 11 February, 1943.

ED559 was officially Taken on Charge on 8 February, 1943. The Operational Report Book details that over the next few weeks 100 Squadron's 'A'-flight maintenance crews readied the 18 Lancasters for operations. During February and early March, Skipper Richard Curle and his crew undertook air tests, day formation flying, cross country navigation and night flying simulations in various Lancasters at the airfield.

By the beginning of March 1943, Lancaster ED559 was ready for the squadron's first offensive operation. Richard Curle and his crew first flew ED559 on the morning of 4 March, 1943 for a test flight to Wickenby as an air test as they ironed out any remaining issues with ED559 prior to that evening's operation. ​ 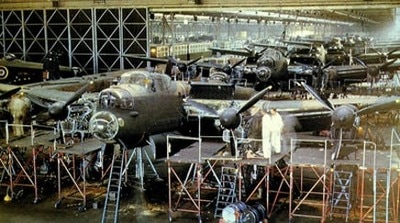 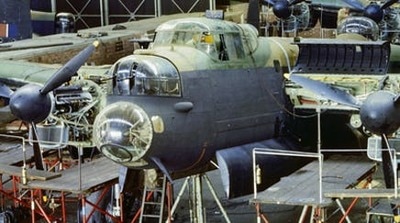 Lancaster cockpit being assembled at Woodford factory during WW2. 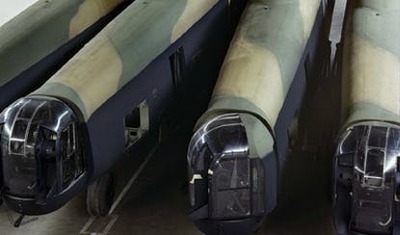 "The Navy can lose us the war, but only the Air Force can win it. Therefore our supreme effort must be to gain overwhelming mastery in the Air. The Fighters are our salvation, but the Bombers alone provide the means of victory."
Winston Churchill, September, 1940

Every aircraft had a Form 78 which detailed its operational history.

ED559's shows that it was Taken on Charge by 100 Squadron on 8 February 1943. Category E denotes the aircraft was a complete write-off as of 5 March 1943 (this may very well be a mistake as this entry may relate to the other aircraft lost on the same operation, ED549,  that crashed near Plungar whilst trying to land at RAF Langar). Missing was then added to the card. ED559 was S.O.C (Struck Off Charge) on the 16 March 1943. ED559 survived less than a month on charge; a clear example of the losses that Bomber Command suffered. 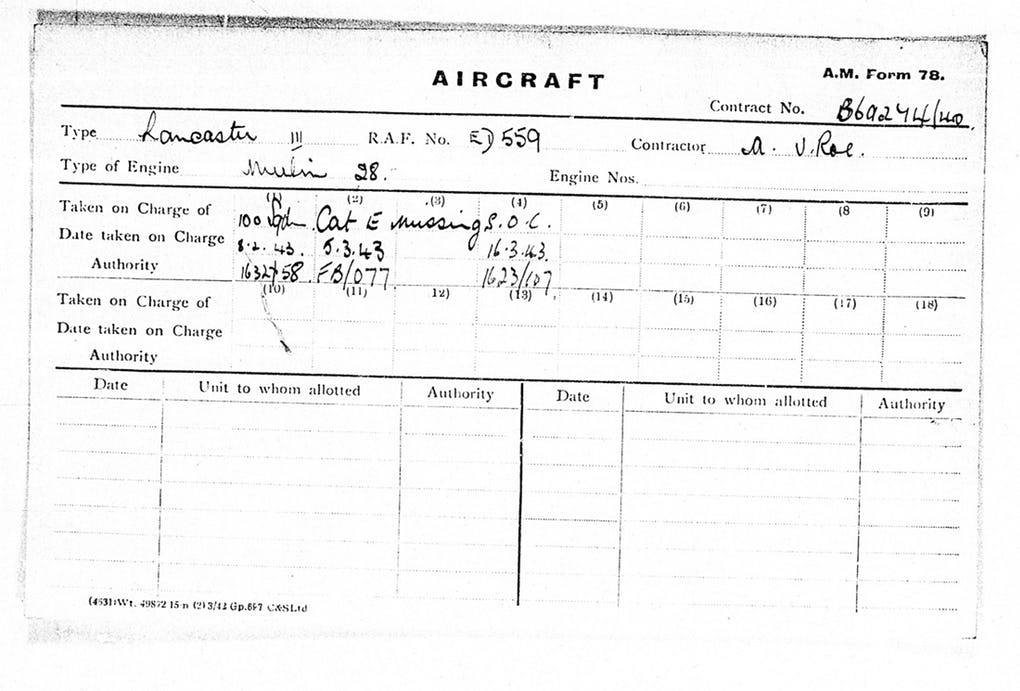 One additional piece of information regarding ED559 from the RAF Museum Hendon archive. This gives a production month number of 42. Oddly this form has the Contractor as Short & Harland, which is surely incorrect. Data reconfirms arrival at 100 Squadron and Taken on Charge on 8 February, 1943.

The letter 'M' refers to the aircraft being missing. Those with an 'E' means the aircraft is 'Written off strength" or "Struck off charge" (akin to a write off). Interestingly, I found some information for 'EM' being used for aircraft missing from an operational sortie.

As for the Production Month being 42, this would seem to indicate that if you started in September 1939, by February 1943, this would be the 42nd month of the war. 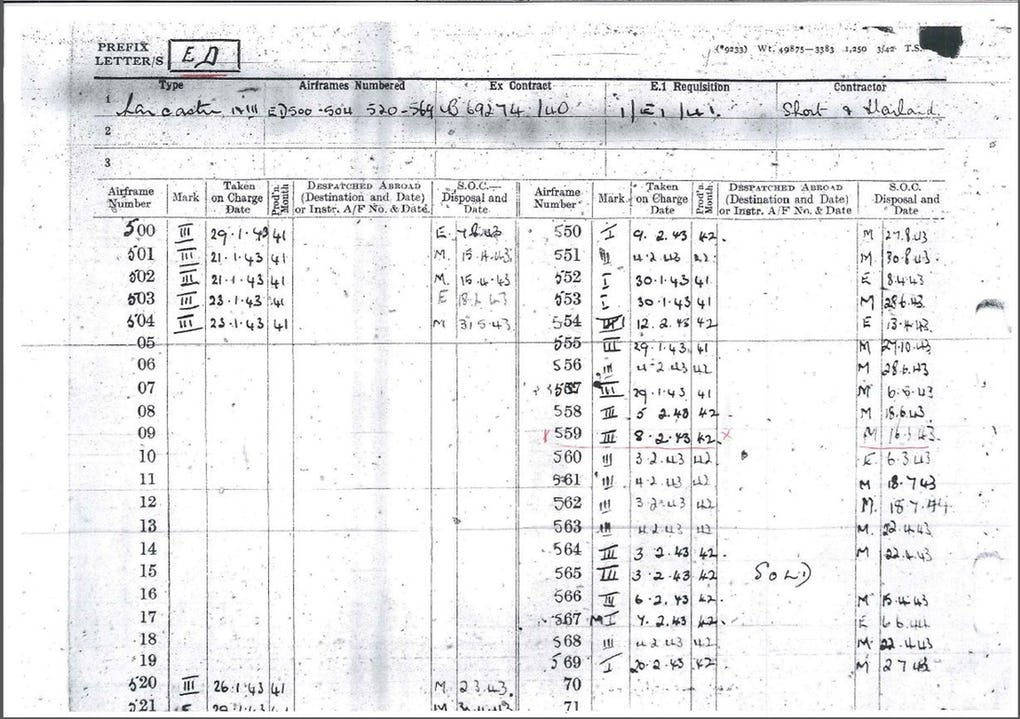 "The Lancaster surpassed all other types of heavy bomber... I would say this to those who placed that shining sword in our hands - Without your genius and efforts we could not have prevailed, for I believe that the Lancaster was the greatest single factor in winning the war."
​
Air Chief Marshall Sir Arthur Harris to Sir Roy Dobson, AVRO, 6 December 1945

A (very) short history of the Lancaster bomber

​The Lancaster bomber became the mainstay of RAF heavy bombers following its introduction. Between 1942 and 1945 Lancasters flew over 156,000 sorties, dropping over 600,000 tonnes of bombs. For every 100 tons of bombs dropped, nine aircrew would perish.

7,377 Lancasters were built in Canada and Britain during the war and 3,349 planes would be lost in action (3,814 in total including accidents). It cost nearly £59,000 to build a 'Lanc' (that's the airframe and engines - the armaments, radios and survival gear etc were addition costs)

​Only 35 Lancasters completed more than 100 successful operations. The greatest survivor completed 139 operations and survived the war, only to be scrapped in 1947.

Average age of a Lancaster crew was 22. Over 21,000 airmen died flying the Lancaster. Ten Victoria Crosses were won in them.
Next: RAF Grimsby (Waltham)