Remembering the crew of Lancaster ED559

"One aircraft failed to return". That's how I've often read of the loss of ED559 (and of hundreds of other aircraft). Five simple words that tell almost next to nothing of the lives of seven young men lost during the Second World War.

It's hard to understand the inner strength that each man found to climb into their 'kites' each night. Reading the biographies of airmen like Don Charlwood ('No Moon Tonight') and Miles Tripp ('The Eighth Passenger') it's amazing to read how crews dealt with the loss of friends and found the courage to climb back into their bombers to undertake another operation.

A certain fatalism is present but also the feeling that someone else will get the 'chop'. After all these years it amazes me how relative strangers quickly bonded to form an esprit de corps that would see them take off into the night together.

Though I never knew these men, I do recognise their sacrifice and with humble thanks dedicate these pages to their memory.

The fate of ED559 as recorded in the Operations Record Book for HQ No.1 Group, RAF Bawtry, March 1943. 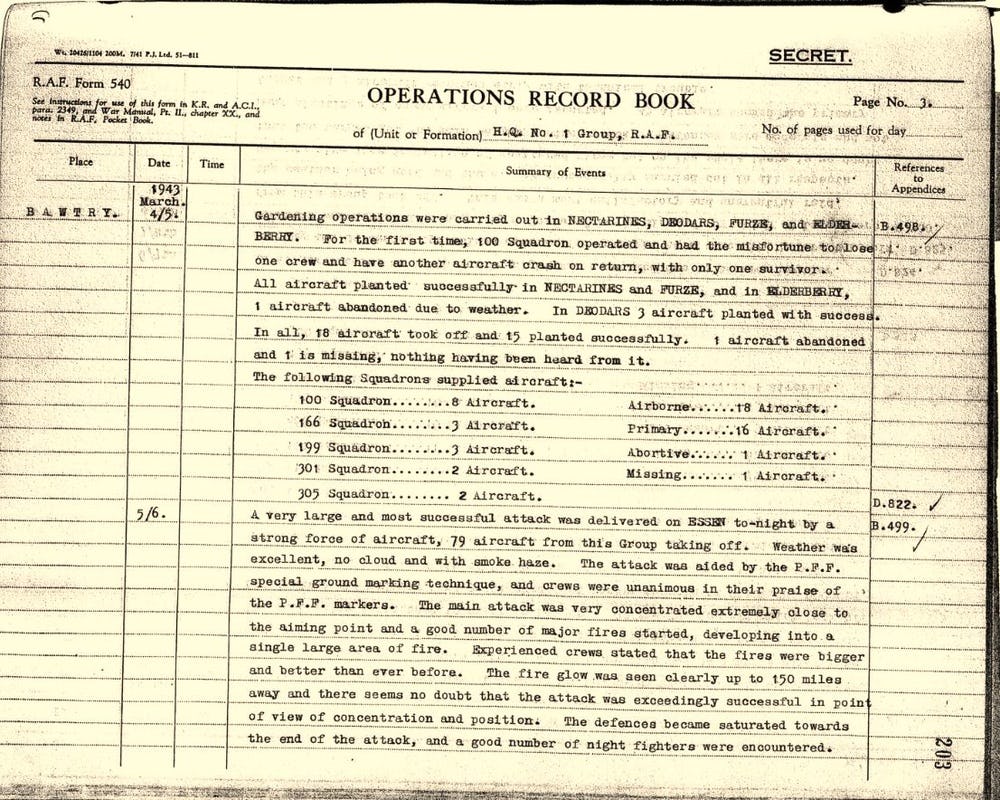 The human cost of the bombing offensive against Germany

The commemoration board at the former RAF Station Waltham displays the cost:

​Over 1000 brave young men came through this entrance - never to return.
Many more were shot down and captured.
We will remember them and salute all who served here.

ED559's crew listed as missing
Every single person who flew with Bomber Command was a volunteer.

During the Second World War 55,573 aircrew were killed. 28% of those casualties came from outside the UK (a lot drawn from the former Dominions of Australia, Canada, New Zealand and South Africa as well as from many occupied countries - Poles, Norwegians etc).

A Lancaster and its crew were only expected to survive on ops for just three weeks.
​

In May 1947, the Air Ministry released the following:

3,491 aircraft were lost flying from Lincolnshire.

RAF Grimsby - known to all who served there at Waltham - was located in the north-east of Lincolnshire. This county was later to be known as Bomber County due to the high number of airfields situated within it.

25,611 aircrew were killed flying from Lincolnshire or 46% of the total of all aircrew lost.

There were 46 airfields (covering 30,000 acres) during the peak of wartime activity with approximately 80,000 RAF personnel and 1,000 aircraft.

There were 16 airfields within a 10 mile radius of Lincoln.

Northern half of the county fell into 1 Group and this group lost 1,429 aircraft and 8,577 aircrew in total.