From volunteering to operations

Every member of ED559's crew went through a rigorous training regime. For Richard Curle his training would have involved: 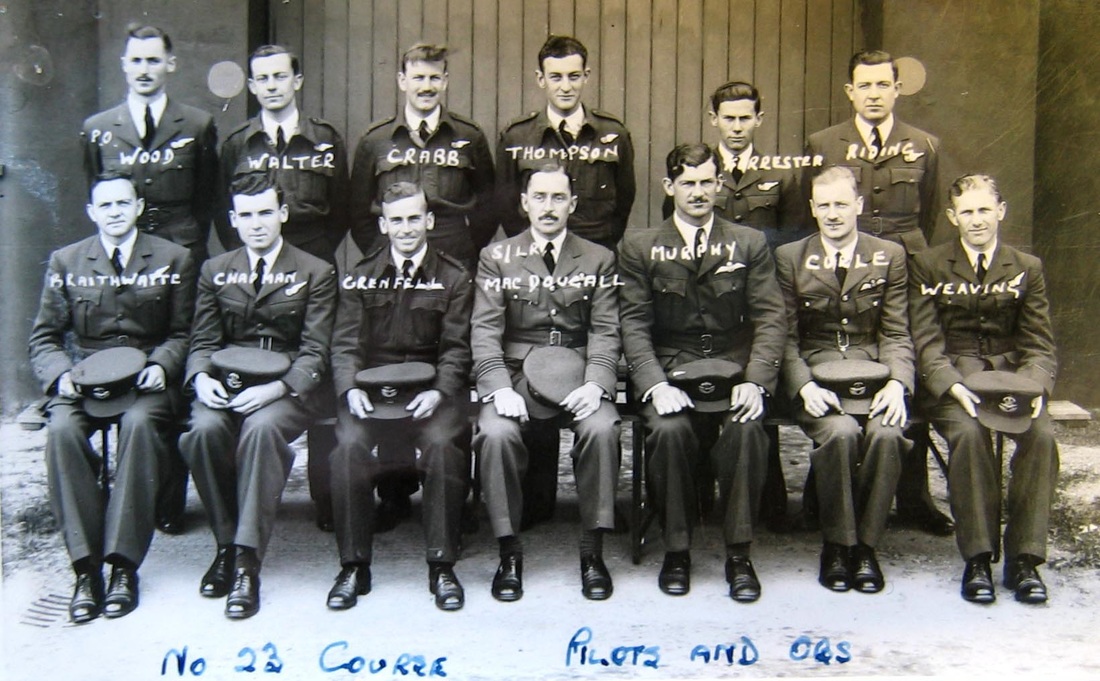 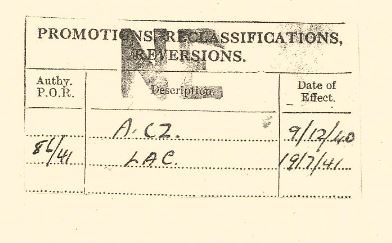 Richard Curle enlisted at Padgate (near Blackpool) in December 1940, serial number 1029107.
The large NE stamped on the above stands for Non Effective, RAF terminology relating to the loss of life.
AC2 = Aircraftman Second Class on 9 December, 1940
LAC = Leading Aircraftman on 19 July, 1941

Dates of Commission and Substantive Promotions 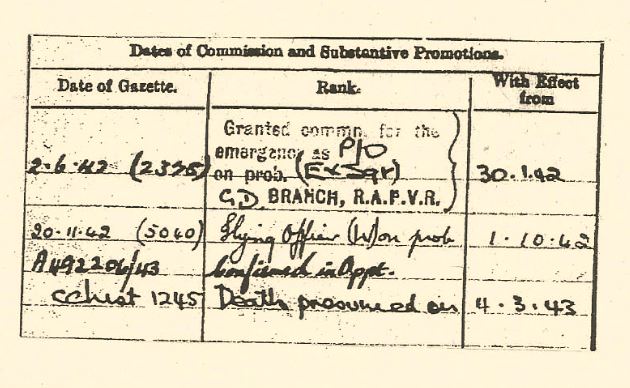 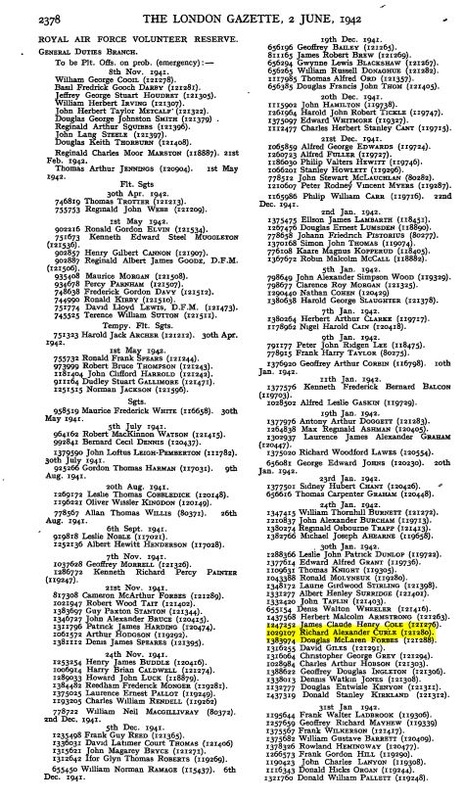 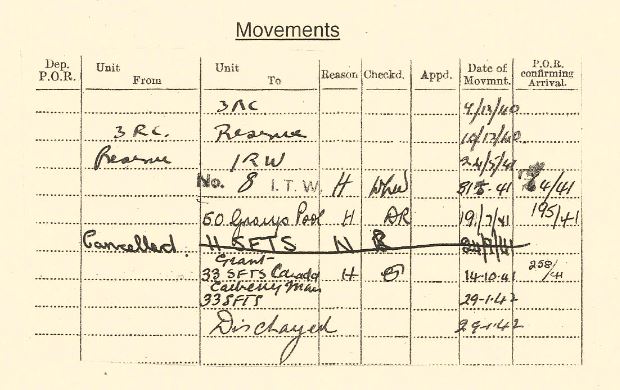 Richard Curle volunteered in early December of 1940 and was placed on reserve as part of No. 3 Reception Centre (3RC above).
On May 24 he was posted to 1RW (No. 1 Receiving Wing in Torquay).
A week later he was sent to No. 8 ITW (Initial Training Wing) based at Torquay in Devon. This is not an aerodrome but where future pilots and observers went through the rigmarole of basic induction into the RAF.
After ITW, he was posted to 50 Group Pool on 19 July, 1941.
He then embarked for Canada to join No.33 Service Flying Training School (SFTS) at Carberry, Manitoba between 14 October, 1942 and 29 January, 1942. 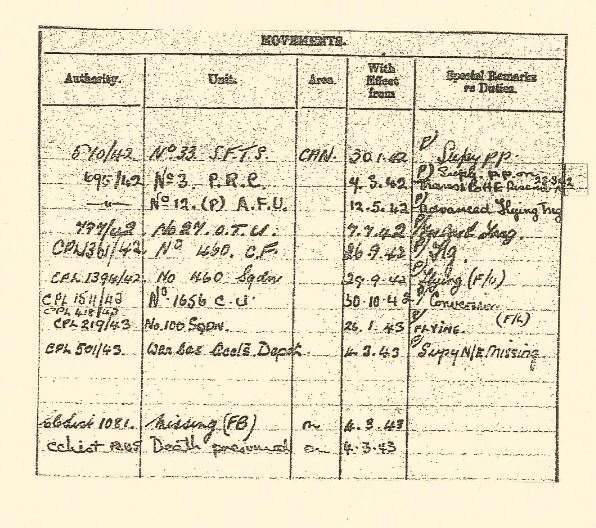 After completion of his training in Canada, and now back in Britain, Richard was sent to No. 3 Personnel Reception Centre (at Bournemouth) in March 1942.
He was then posted in No. 12 (P) AFU ((Pilot) Advanced Flying Unit) on 12 May, 1942. This was located at RAF Spitalgate near Grantham in Lincolnshire. Here Richard moved from light basic trainers (Tiger Moth and Miles Magister) onto  twin engine aircraft such as the Anson and Oxford.
On the 7 July 1942 Richard arrived at No. 27 OTU (Operational Training Unit) at RAF Litchfield. Richard and his crew were flying operations over Germany in a Wellington bomber.
From Litchfield he was transferred to No. 460 CF (Conversion Flight). But only for 24 hours - he rank was F/O (Flying Officer).
In late October Richard joined No. 1656 HCU (Heavy Conversion Unit) to fly Lancaster bombers) at RAF Lindholme.
On January 26, 1943 he joined No. 100 Squadron at RAF Grimsby with the rank of F/L (Flight Lieutenant).
Om 4 March 1943, Richard was noted as Supy N/E Missing (supernumerary no-effective missing) through the War Casualty Accounts Department.

The Missing (FB) correlates to Missing in Flying Battle akin to lost to enemy action.

In honour of the fallen 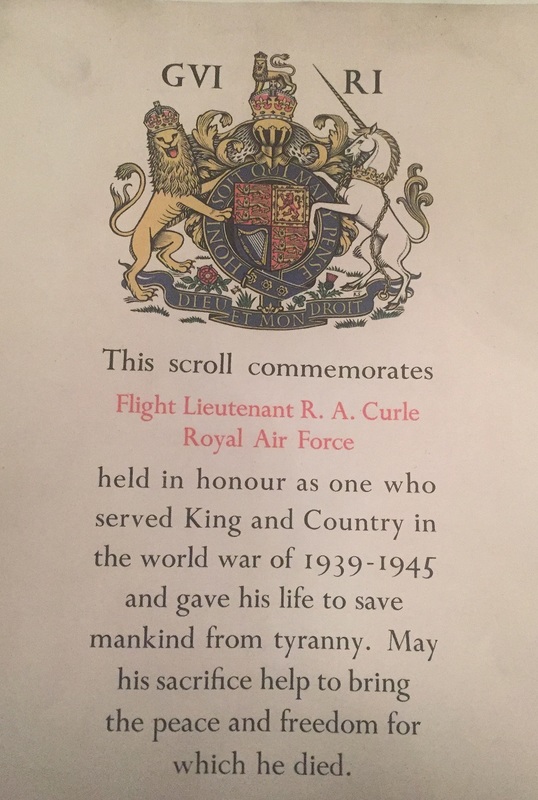