Opened on 12 June, 1933 Waltham Grange Aerodrome was a small licensed civilian airfield. The runways were grass covered with four landing strips (N.-S. 700 yards; N.E.-S.W. - 750 yards; E.-W. - 600 yards; and S.E.-N.W. - 730 yards). Fuel, oil and water were available and minor repairs were possible from resident ground engineers. There was an Aerodrome Control Officer stationed at the airfield and all arriving and departing aircraft had to report to him. There were two wood hangars and a club house containing a small restaurant.

From 1938 the airfield was chosen by the  Air Ministry to be an Elementary and Reserve Flying Training School and members of the RAF Volunteer Reserve (RAFVR) and Civil Air Guard (CAG) were trained there.  In July 1939 the airfield was opened as Grimsby Municipal Airport. The airfield was  requisitioned by the Air Ministry in May 1940 and during the winter of 1940-41 it was expanded to support a bomber squadron. The airfield then became an extension of nearby RAF Binbrook. 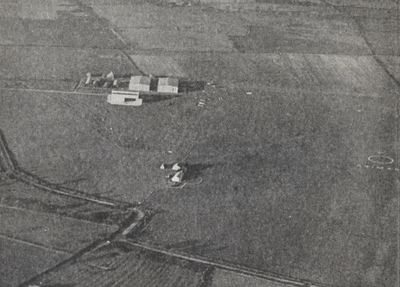 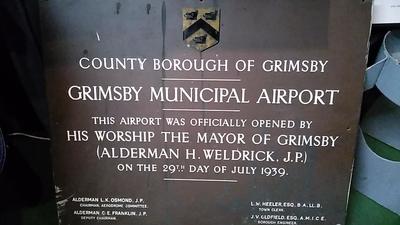 Although officially named as RAF Station Grimsby, it was known to all those that served there as Waltham, after the nearby village (the station was known as RAF Waltham until September 1943). The station was operated by No. 1 Group, Bomber Command whose headquarters were at RAF Bawtry Hall in South Yorkshire. It was home to initially Wellingtons of No. 142 Squadron and then Lancasters of No. 100 Squadron and finally No. 550 Squadron.  In  the autumn of 1943, it became a  substation to No.12 Base at Binbrok.

The Air Ministry had concrete runways constructed  (the first in north Lincolnshire) and the RAF moved onto the airfield in the summer of 1941. In November of the same year, No. 142 Squadron arrived with two flights of Wellington bombers and ground crew. The accommodation at the airfield was of a much better construction than other airfields being wooden and not the extremely cold Nissen huts. Walkways between buildings were paved, saving personnel from trudging through mud. When fully staffed with flight crew and all other airfield personnel the total of people onsite reached approximately 1,500.
Waltham continued to be administered from Binbrook at this time.

In early December 1942, half of 142 Squadron was relocated to North Africa and the other half to RAF Kirmington (where it merged with 150 Squadron to form 166 Squadron). In its place a reformed 100 Squadron arrived at Waltham in late December 1942 with its Lancaster bombers as part of No. 1 Group Admin Instruction No. 11. ED559 was involved in the first operation for 100 Squadron. Between March 1943 and the end of the war, over 4,000 sorties were flown with 92 aircraft lost in action with a further 21 destroyed in accidents.

RAF Grimsby lost 164 aircraft during the war - 116 Lancasters and 48 Wellingtons. 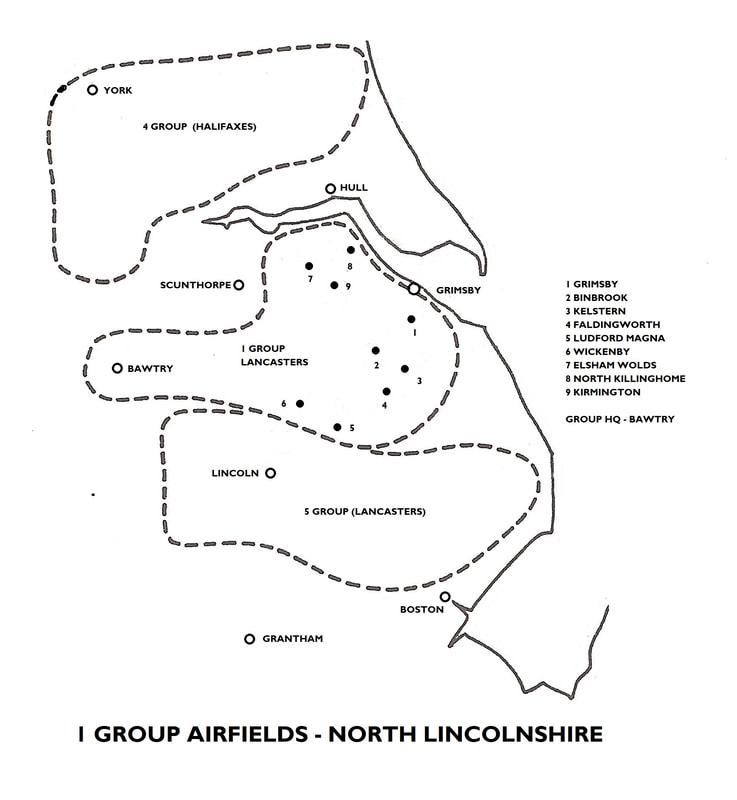 From July 1941 on wards, all Bomber Command airfields were constructed in accordance with the Class 'A' standard (the 'A' deriving from the shape of three interlocking runways). Waltham featured three converging concrete strips for takeoffs and landings. Runways were optimally placed at 60 degree angles to each other in a triangular pattern. The main strip - runway 18/36 at 1,200 yards long - was aligned southwest to northwest allowing aircraft to takeoff and land into the prevailing winds. The other two runways - 06/24 (1,400 yards) and 12/30 (1,100 yards) - were used when the winds were blowing from other directions. 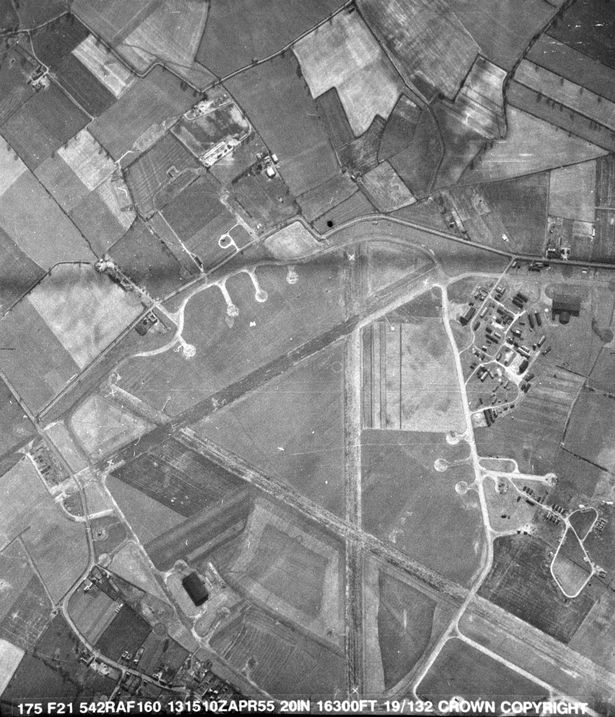 Aerial view of RAF Station Grimsby (Waltham) - taken 1955
Around the perimeter track were 36 aircraft parking sites and the airfield featured two T2 hangars (118' wide, 25' clear height, 39' total height, and 239' long) and a single B1 hangar (approximately half the size of a T2) . The technical site had a Type B control tower with operations room (pattern 7345/41) and administrative buildings. The dispersed site contained crew lockers, dryer rooms along with the numerous other buildings of an operational airbase such as offices, sick quarters. Built away from the main site were the aviation fuel stores and bomb dumps. 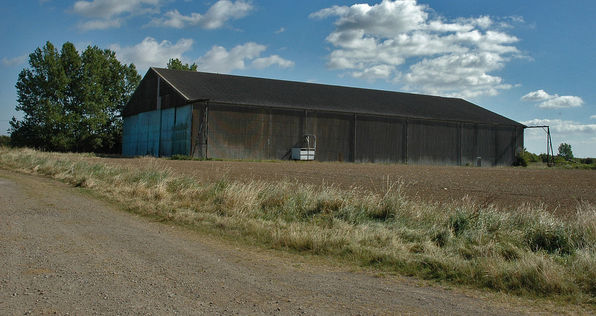 In late 1942 and early 1943 the runways were extended to accommodate 100 Squadron's Lancaster bombers. Runway 18/36 grew to 2,000 yards and 12/30 was extended to 1,400 yards. A number of the existing pan-type parking locations were replaced with loop-style dispersal hardstands. Additionally, accommodation for roughly 2,500 personnel was made available. 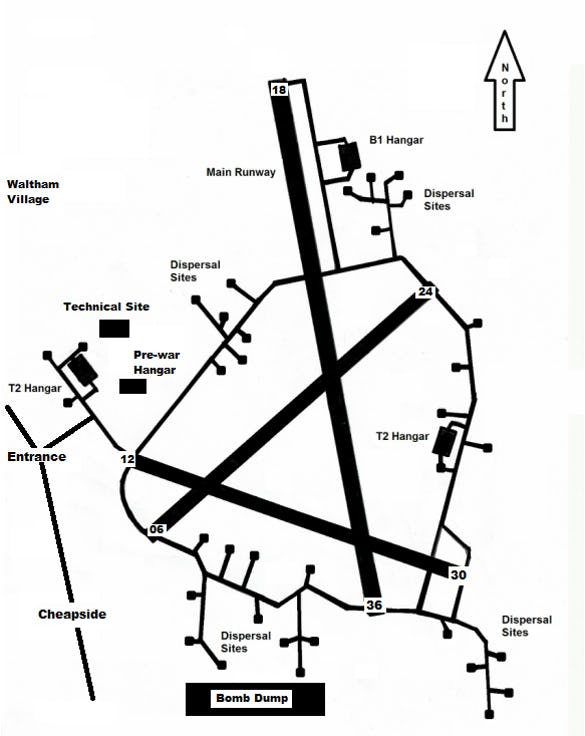 End of WW2 service and closure of RAF Grimsby

In April 1945, with the Second World War drawing to a close, the airfield's runways were considered to be in a poor state but were deemed not worthy of renovationd. This forced 100 Squadron to relocate to RAF Elsham Woods on 2 April 1945. Put into Care and Maintenance status, the hangars were used for storage. The station finally closed in 1950 and was sold off in 1958. 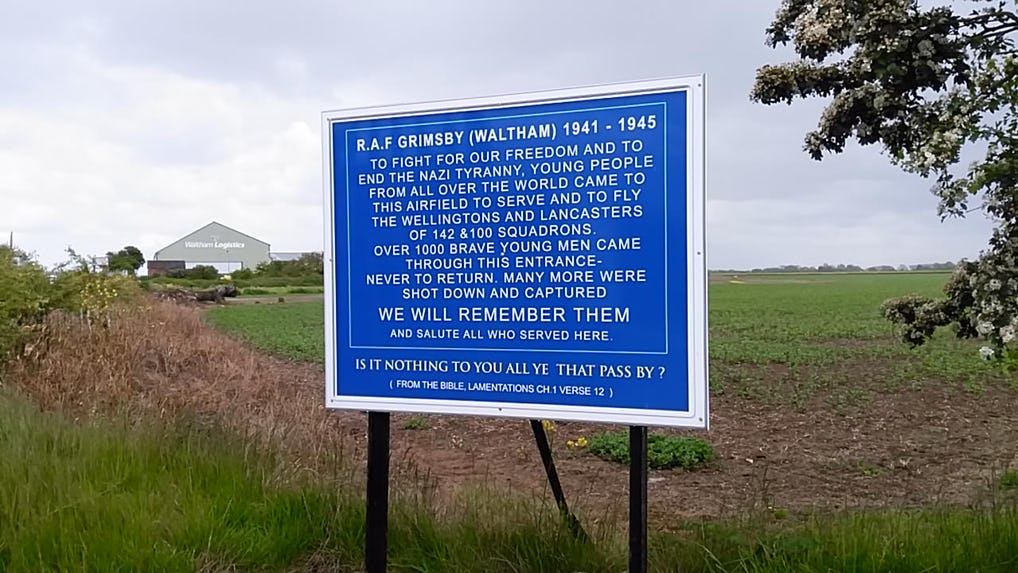 Commemorative board at the entrance to RAF Grimsby (Waltham)

Remaining peritrack and hangar at RAF Grimsby in 2015

RAF Grimsby (Waltham) - remaining B1 hangar and peritrack
Next: 100 Squadron